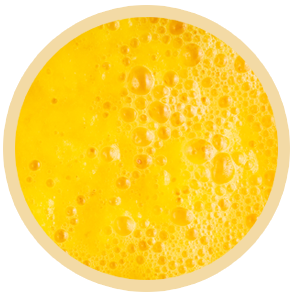 The city water supply is used as the starting raw material in the water processing procedure. Apart from that, this water may be used for heating in the tunnel pasteurizer, in the cooling unit or in the tanker.

This is the process of saturating water with oxygen by introducing compressed air. Water runs through Raschig’s rings and oxidates iron.

Residues created in the aeration phase are removed on the sand filter.

Chlorination is performed by dosing the Na-hypochlorite/Ca-hypochlorite in-line into water before it enters the tank-chlorinator. The residual chlorine concentration inside the chlorination tank is 1-3 ppm, and the contact time is minimum 30 minutes.

Residual chlorine from chlorinated water is removed on the carbon filter.

The RO system is used for removing salt, as well as the existing microorganisms, from water. Anti-scaling agent (used for preventing scale subsidence on the membranes) and Na-metabisulfate (bonding with the free chlorine surplus from the water and acting as a biostatic) are added into water at the entrance. Water runs through the 5 µm bag filter first, and then through the membranes with 0.2 µm porosity. Softened water appears at the exit. Part of the concentrate returns to be processed, while permeate is distributed to the RO tanker through the buffer tank.

Delivered sugar has to be in accordance with the specification. Each delivery has to be followed by the laboratory report from the manufacturer. The input control (according to the control plan) and sampling (for the chemical and microbiological testing) are performed at the entrance. Only sugar in accordance with all specification requirements is allowed to be used in the syrup preparation process.

Sugar is stored in the sugar storage. Storage conditions are defined by the specification and they are monitored via data logger.

Sugar is injected into previously heated water in the simple syrup tank. Sugar and water are mixed until sugar is completely diluted (visual monitoring). Syrup is then pasteurized until the desired recipe temperature is reached. Dry matter content in the simple syrup is defined by the recipe.

Simple syrup is filtered in two steps while it is being transported into the final syrup tank. First it runs through the 1 mm prochrome filter. The second step is filtering through 25 µm bag filter.

After filtering, simple syrup is cooled by passing through the bisection cooler where its temperature is being lowered in two steps: from the starting point to 40˚C and then, from 40˚C down to the room temperature.

The components used in beverage preparation have to arrive together with the accompanying documentation proving their health safety, accordance with the specification and allergen presence.

Components are storaged in accordance with the specification defined conditions, into the component storage i.e. cold storage. The components delivered by the transport tank truck (wine) are transferred into the syrup tank immediately after the acceptance.

Components originally packaged are unpacked just before weighing. If they are utilized (previously weighed) by the manufacturer, they are weighed on the scale according to the recipe.

The components are diluted in the treated water according to the recipe. After dilution they are transferred to the final syrup tank through the 1 mm prochrome filter.

Cooled simple syrup is transferred into S1 or S2 tank. Components diluted by the treated water at prescribed temperature are added. Component dilution process is performed in the dilution tank or in the simple syrup tank. The components are then transported (through the 1 mm prochrome filter) into S1 or S2 tank. Liquid components are directly added into syrup without being diluted previously.

Final syrup is constantly mixed during the preparation process in order to homogenize the components as much as possible. After adding all the components, dry matter is corrected to the required level (defined by the recipe) by adding certain amount of treated water while mixing all the time.